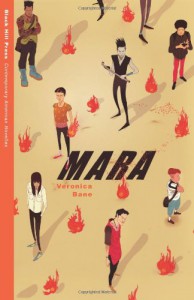 Veronica Bane’s MARA is an intriguing tale about a group of misfits finding common ground and friendship amid social tensions in the town of Jericho.

As for characterization, it’s a bit weak, but again, it’s a novella and you can’t go into in-depth character development otherwise you sacrifice other aspects such as narrative. Our main character is Mara who has the ability to control fire and comes from a troubled past. We get to meet her brother briefly and it’s pretty apparent they have a rocky relationship. Mara does not live with him and instead went to live in Jericho with her aunt and uncle. Then we have Miyuki who can control water and unlike Mara is just coming to terms with what she can do. Other characters can control elements such as lighting, rocks, and wind. We have a few secondary characters whose role isn’t widely known until towards the end and it adds a bit of mystery to the plot.

I liked MARA, but wish it had been longer in order to fully appreciate the world Bane builds. I also feel that we are given a glimpse into the setting, but not enough and I realize it’s a novella and there’s only so much you can do, but I’m still left with questions. The most important one, why people branded as Natives (or Unusuals) were targeted and what type of trouble were they apparently causing? Why are they such a threat? I’d also like to know what happened once they were rounded up. Bane gives us an insight to their fate, but I’m still curious and I’m sure a few were able to escape. If they did, where did they go? I’d also like to know more about Mara’s personal background and her family dynamics.

Overall, MARA is fast paced and a satisfactory read. I’m not sure if Bane has plans to expand on this and make it into a series, if so it has the potential to become amazing! Fans of YA especially those who love dystopian books will enjoy Veronica Bane’s MARA. I’ll be keeping an eye out for Bane and can’t wait to see if she expands on MARA.