Review: How to Discipline Your Vampire 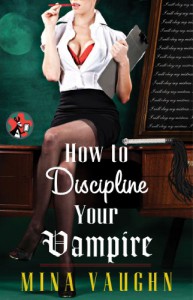 When I first read the synopsis for Mina Vaughn’s HOW TO DISCIPLINE YOUR VAMPIRE , I couldn’t wait to get my hands on it because it sounded like a really fun read. While Vaughn does deliver on humor, the romance aspect between Cerise and William was a bit underdeveloped.

Cerise Norrell is a substitute school teacher by day and a Domme by night. Unable to find a sub worthy of her and her expectations, she offers trial periods to potential candidates. No one seems to interest her or able to meet her demands, but then out of nowhere William Gentry appears and he’s ready to submit. Together Cerise and William embark on a test period to see if they’ll be a match. William surprises Cerise by meeting her demands and oftentimes exceeding expectations. When William wants to take things further than their agreement, Cerise is prepared to walk away. Will William be able to get Cerise to open up about her past and will Cerise believe William’s secret?

Writing is first person narrative using dual perspectives from both Cerise and William. Vaughn has a talent for mixing humor throughout the novel. I laughed at William’s nickname among the community, “Chilly Willy.” It’s also very clear that Vaughn understands teenagers and the interaction between Cerise and the kids at school was believable. Vaughn also incorporates William’s history throughout the narration using journal entries and I really enjoyed those! We have good character development and both Cerise and William grow as the story progresses. Although we have several secondary characters, none play a huge role and basically just there to fill out the daily activities our main protagonists.

I’ll come out and say William’s secret since the title hints at it: William is a Vampire. We’re accustomed to the brooding, sexy, and very alpha vampire that makes us…ahem…quiver all over. William is different in the sense he’s very much a beta hero and I know a few readers might be turned off because they don’t want to see a male character give up control. Vaughn; however, does add a little twist to the whole D/s (Dominant/submissive) relationship. When we finally get to know Cerise’s past and why she prefers to be a substitute teacher, William issues an ultimatum. It’s here that the D/s relationship changes and William, himself, takes control of their future. Don’t take William’s desire to be dominated as a weakness because he’s very much in control.

While I did enjoy Vaughn’s ability to tell a story, I felt we were missing a few key pieces. The conflict between Cerise and William regarding an ex-sub of Cerise’s is a bit flat. You can tell early on that he’s going to cause trouble at some point, but he never does. When the ex is finally relevant, William doesn’t believe Cerise’s explanation which causes them to go their separate ways. Believable? Not really, especially since Cerise believes he’s a Vampire! William could have easily done research using the public archives. Furthermore, I really couldn’t feel the attraction between Cerise and William. It sort of felt as if they came together because each needed something and that was it.

If you’re looking to spend a lazy weekend reading or have had a difficult work day, Mina Vaughn’s HOW TO DISCIPLINE YOUR VAMPIRE is the book to read. Fans of erotica or paranormal romance, I suggest downloading a sample before proceeding to see if you like what you read. I am looking forward to reading Vaughn's future books.