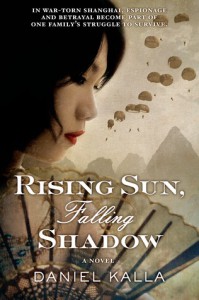 Daniel Kalla’s RISING SUN, FALLING SHADOW is the highly anticipated sequel to THE FAR SIDE OF THE SKY. If you’re worried about spoilers, you won’t find any major ones preventing you from enjoying RISING SUN. Kalla provides enough back-story and allows a reader to delve right in without being lost.

The year is 1943 and bowing to Nazi pressure, the Japanese force thousands of Jewish refugees in Shanghai to relocate. Newlyweds Franz and Sunny Adler endure the move to the ghetto and continue to operate the only hospital for Jewish refugees amid difficult conditions. While Franz is willing to make the best of the situation, Sunny wants revenge for the death of her father. She joins a resistance group, believing in their cause while Franz’s daughter, Hannah is lured into a smuggling ring. The threat of Nazi interference lingers in the background while a power hungry representative of the Bureau of Stateless Refugee Affairs begins to make life difficult for those in the ghetto.

Kalla’s RISING SUN, FALLING SHADOW has it all: love, intrigue, and betrayal. We have good character development and although this is the second book in a series, I don’t feel as if Kalla stopped developing his characters. We get to know each one as if it were our first introduction. Franz Adler is a Jewish surgeon who is noble and isn’t afraid to stop an injustice. He also is cautious and would do anything to protect his family. His wife Sunny is courageous and caring. While his daughter, Hannah, struggles to be seen as a teenager. She’s aware of her surroundings and doesn’t like to be treated as a child. We have a wide cast of secondary characters who are friends of the Adler’s who become ours as well. Kalla also introduces us to historical figures including Baron Jesco von Puttkamer who was a German aristocrat in charge of organizing a German propaganda office. Although never proven, it has been suggested that Von Puttkamer was present during a Japanese / German meeting where the Germans tried to convince the Japanese to put all Jewish refugees in a concentration camp or kill them. Von Puttkamer plays a vital role in RISING SUN alongside the sadistic Kano Ghoya who would later become the ex-vice chief of the Bureau of Stateless Refugee Affairs.

The writing is engaging and heartfelt. Kalla has a talent for bringing wartime Shanghai to life. We have a few subplots running alongside and at times it felt disjointed, but it’s needed. Without them, we have an incomplete story and in many ways, each character has their own plot which is important in a historical fiction novel. Can I take a moment to discuss the emotions Kalla evokes? I could sense Jia-Li’s optimism the moment she spots American planes in the sky and was smiling because I knew she was happy to see them. I could feel Sunny’s anxiousness when she realizes the Underground isn’t exactly what she thought they were. When Hannah is involved in a smuggling scheme and she’s about to cross out of the restricted zone or even into it, her hesitation and fear is felt. Kalla makes us care about the daily lives of these characters, even the ones we should hate. He also makes us question what the characters are doing. For example, Franz struggles with a difficult decision that goes against the Hippocratic Oath and one of the Ten Commandments. I won’t go into detail because I don’t want to give a spoiler, but as a reader, you understand Franz’s thought process. You put yourself into his shoes and begin to question what you would do. Another doctor, Max, begins to question God and goes as far as to say they aren’t his chosen people but rather cursed. If you’re religious, your heart begins to break when you begin to think of your own relationship to religion or God.

One of the reasons people shy away from historical fiction is because they are afraid of drowning in historical facts or find history boring. While Kalla does give us a history lesson, he does it in a subtle format. He takes us through 1943 and the events in Shanghai; Jewish refugees are moved to the Hongkou District where a little over 20,000 refugees lived in an area of approximately one square mile. We see Franz call himself stateless and here Kalla explains how and what the Japanese have done to them. Kalla delves deeper into history by writing about the refugees that are often ignored by history. We often read about European Jews and how many fled to allied countries, but how many of us actually knew of Jewish refugees in China or the German support of the Japanese? I can only imagine the level of research Kalla conducted. He does a superb job transporting the reader to 1943 and making us feel as if we are there.

What I really enjoyed about Kalla’s RISING SUN, FALLING SHADOW is the message throughout the novel: hope. Through the despair of war and when things look bleak, Kalla reminds us, through our darkest moments there is always a glimpse of light. I’m pretty sure the title wasn’t intentional, but if we take a moment to think about the Second World War: it ends in 1945 with the Japanese finally surrendering in September. Kalla’s RISING SUN ends at the start of 1944. While these characters still have a little over a year and half to go, the shadow of war is beginning to fall and at the end of it, is light.

And as for the ending, I wouldn’t call it a cliffhanger. Kalla provides enough closure and it’s easy to imagine the final year of the war and the fate of our friends. There are a few unanswered questions that I hope get addressed in the final installment and I can’t wait to see how the series concludes.

If you’re a fan of historical fiction or are interested in the Second War World, I highly recommend Daniel Kalla’s RISING SUN, FALLING SHADOW. I can’t wait to go back and read THE FAR SIDE OF THE SKY.